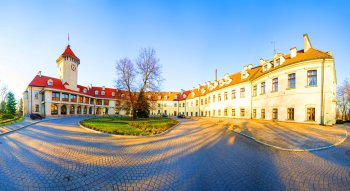 The history of the castle in which our hotel is located gives the evidence of the unique character of our hotel. The history is so rich, that it would be possible to write a passionate book about it. Big and small events took place here, dramas on a national and private scale, romances, political storms of war and peace times. The castle survived, among others, the wars with Teutonic Order, Swedish Deluge, partitions and two world wars.

The hotel was destroyed during the wars, such as in the 17th century when the Swedish Invasion had taken place, and the castle had been devastated and partially burned. Although, the castle was rebuilt every time, its magnificent walls give every passer-by a glimpse of history. Nowadays, our hotel situated in the castle ,combines the climate of the past with the highest modern standards of décor to create a specific atmoshere.

Presently, the hotel in the castle in Pułtusk is under the ownership of the “Association of Polish Community” (“Wspólnota Polska”). This old residence of bishops together with the closest areas was transformed into The House of the Polish Diaspora” (Dom Polonii) by a government decision in 27 July 1974. The castle was rebuilt in the renaissance style and its gates were solemnly opened in 16 July 1989. 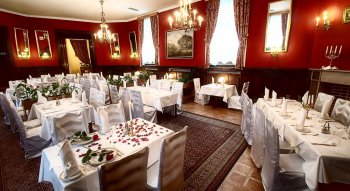 The Hotel in the castle walls. The castle and podzamcze. The breeze of noble past…
The paved high road leads to the castle hill and it directs to the main gate which is guarded by two bastilles. It is the picturesque road to the place which is the testimony of the Polish past… One may meet here the gripping history, breathe the noble atmosphere and taste the delicious and diverse Old Polish cuisine. We open the Old Polish door in front of you!

All the guests find something here for themselves. Those who desire peace and rest are invited to catch their breath with a cup of aromatic coffee, a gondola cruise on the Narew River and a massage which makes everyone feel entirely at ease and relaxed. The lovers of the active ways of spending their free time are offered a bicycle trip through the tracks which enable the discovery of the beauty of our surroundings. There are numerous other attractions waiting for you here. Because we really do everything so that the guests spend their time here more pleasantly!

Sincerely thank you for the interest in the one and only castle hotel located in Pułtusk where the splendor of the past goes hand in hand with professional and modern service. We are entirely at your disposal. Our offer contains more than other hotels...